The following is an article from the Canadian magazine Outword that I was interviewed for by Denton Calander, a PhD research student at the National Centre in HIV Social Research in Sydney. You can download the original PDF article by clicking here. 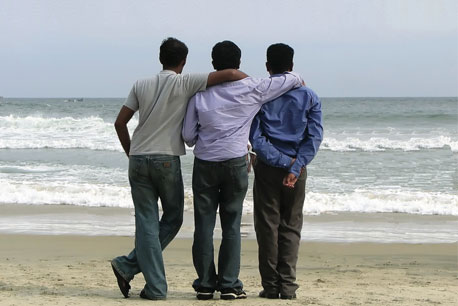 What does a relationship look like in 2011?  Well to start, that question itself is a bit pointless because, as we all have surely experienced, every relationship looks a bit different.  But wait a tick, isn’t a relationship supposed to be between a man and a woman who love each other?  Marriage, kids, house in the burbs, the whole shebang?  This ‘traditional’ idea of a relationship may seem a bit silly to many of us but not so long ago it was the standard paradigm for couples (and for many people, it still is) and the goal to which all were meant to aspire.  There were those on the fringes who challenged this ideal, but they were mostly considered radicals (think: Mormons in Utah, just by way of example)

This has changed, of course. With movements such as same-sex marriage, divorce, adoption, surrogacy, and more, we (well, many more people than before) are now equipped with a definition of relationship that is more fluid, more flexible, and unique to each couple. Scratch that, “couple,” how narrow minded to restrict a relationship to only two people. This is 2011, people: the label ‘relationship’ is what we want it to be.

Starting with the basics, most people still think of a traditional relationship as being between two individuals who devote themselves to each other exclusively. This would be the modern equivalent of ‘going steady’ and brings with it all the stereotypical relationship-y ideas of monogamy and commitment. Old fashioned? Maybe not, according to Clinton Power, a relationship therapist in Sydney, Australia.

But free love, communication, and redefining relationships aside, can non-traditional relationships actually work? Power seems to think so and a growing body of research over the past decade would support them as viable relationship options.

“I tend to see more and more young couples coming to me who want to be monogamous and committed,” says Power.  According to Power, who has been a relationship counsellor for almost 10 years, most people do tend to subscribe to a traditional relationship model of monogamy and one-on-one.  However, there are those who instead look to define their relationship in different ways. “For some,” says Power, “a non-traditional model that doesn’t fit into a heterosexual majority kind of model seems to work better.  There is a lot more flexibility in these relationships and in negotiating how they work.”

A new study … seeks to describe what types of rules gay men set up in open relationships and what the effects of breaking these rules are.

So what exactly is a “non-traditional model?”  In Power’s experience, one of the most common and popular is the open relationship.  Essentially, in an open relationship members of the partnership will engage in sexual/romantic encounters outside of the couple. Beyond that vague definition, the rules vary by relationship. “There are so many variations of the setup, every couple does it differently,” says Power. “It’s about setting up the rules that work for you.” This notion of creating the rules of a relationship and not just following the rules imposed by society is at the core of an open or non-traditional relationship. For many, this may seem like the best of both worlds but having a non-traditional relationship brings with it unique problems and conflicts. “What tends to lead to complication is that, if there’s an arrangement, there hasn’t been clear communication about just what that arrangement is.  Or,” says Power, “[the couple] hasn’t considered all the possibilities.”

So it comes back to a typically traditional relationship idea – communication.  Power stresses this as the key to any healthy and happy relationship but suggests that it is even more important when navigating open or non-traditional relationships.  “Being very clear about the boundaries and the limits is central. One couple may say, ‘I don’t want to know anything about your exploits,’ but for another couple it may be important to explore them together.”  Power advises, “The only way to know this is to talk about it and set limits early on.”

According to Power, non-traditional relationships are more common in same-sex couples and men in particular.  What this may say about gay men is likely related to the sexual non-conformity that, in many ways, defines the LGBTQ+ community.  But free love, communication, and redefining relationships aside, can non-traditional relationships actually work?  Power seems to think so and a growing body of research over the past decade would support them as viable relationship options.  A study from the U.S.A. in 2004 found that relationship satisfaction among gay men was the same regardless of whether the couple was monogamous or open.  The study did find, though, that breaking the established ‘rules’ damaged relationship closeness, which is echoed by Power’s practical experience. A new study currently underway at the Victoria University in Melbourne, Australia, seeks to describe what types of rules gay men set up in open relationships and what the effects of breaking these rules are.  This research is a testament to the ever-changing definition of ‘relationship’ as something more than one-size-fits-all.

“Relationships are about doing what works,” says Power, “and communication helps see that realized.”

— The author Denton Calander is a PhD research student at the National Centre in HIV Social Research in Sydney, Australia.  To comment on this or any other article in Outwords, write to letters@outwords.ca