Loneliness has become an epidemic within the gay male community. Gay men who aren’t in an intimate relationship often describe feeling a deep and profound sense of loneliness. This emotional pain can be a problem as it can lead to serious mental health issues.

Knowing how and why loneliness happens in gay men is essential to understanding what you can do about it.

Why are gay men lonely?

Loneliness happens when you feel cut off or isolated from people and communities. This isolation is prevalent in male gay communities because it can be hard to break into the friend communities of gay men.

The social shift from in-person meetings to online and social media platforms has also exacerbated feelings of loneliness. Text messaging, as a dominant form of communication, also lacks a sense of connection. You can’t see emotions or intent, which often starts fights when a message is misunderstood or misinterpreted.

Social media and hook-up apps like Grindr are major culprits contributing to the loneliness experienced by gay men. These platforms feed your existing insecurities, beliefs that promote negative self-talk, and feelings of inadequacy or low self-esteem.

What causes loneliness in gay men?

The absence of deep connections and emotional intimacy within relationships is what creates a sense of loneliness. Not knowing how to build relationships based on love, connection, and intimacy is a problem that develops into emotional and social isolation.

The brain perceives this isolation as a threat, and in more primitive times, it was a form of punishment. This ostracisation and rejection from the tribe often resulted in death.

You can feel isolation both when you’re separated from others and when you’re in a crowd. Thus, loneliness has a broader reach than you may realise. It can also exacerbate many health conditions, including anxiety, depression, dementia, high blood pressure, and heart disease, as well as weaken your immune system.

As a gay man, it’s possible you’ve struggled with feeling excluded from groups, which can develop into a deeper feeling of not belonging.

Experiences of rejection as a kid, growing up gay in a straight world, can heighten your feelings of exclusion. Hiding your sexual orientation to feel acceptance creates a state of prolonged stress, negatively impacting your mental health. This is known as minority stress.

The LGBTQIA+ community is already a vulnerable population that tends to have higher mental health issues. Social isolation, avoidance of rejection, and withdrawing inward on top of that compound issues like depression, anxiety, and suicide.

The connection between sex, drug use, depression, and loneliness

Gay men often turn to drugs or sex as a readily available method to soothe emotional pain. The initial effect of taking drugs or having sex is soothing or pleasurable, and those positive feelings self-medicate against the emotional pain of loneliness.

The problem is sex and drugs create a sense of physical intimacy, whereas the alleviation of loneliness connects to emotional intimacy. In taking drugs and/or having sex, you’re seeking intimacy and closeness but aren’t achieving the type of intimacy that fills your emotional needs.

Over time, the use of sex and substances can increase significantly and may become part of your self-soothing ritual. Then suddenly, it’s an out-of-control addiction that’s more harmful than beneficial.

This is a self-defeating cycle; instead of feeling soothed and fulfilled, you feel more and more empty. This cycle can make you particularly vulnerable to depression, as your attempts to handle your loneliness instead compound the problem.

The pandemic has exacerbated loneliness in gay men

The messages of social isolation and not getting close to people in response to the COVID-19 pandemic have exacerbated the entire issue of loneliness in gay men.

Humans are naturally wired to connect with others, see and interact with each other, and seek touch. The conditions of the COVID-19 pandemic have largely taken that away.

If you’ve been stranded away from home or locked in your apartments because of COVID-19 lockdowns, you’re likely been heavily impacted by loneliness. You may even feel stressed and anxious about being too close to other people – the very thing that is the antidote to loneliness. 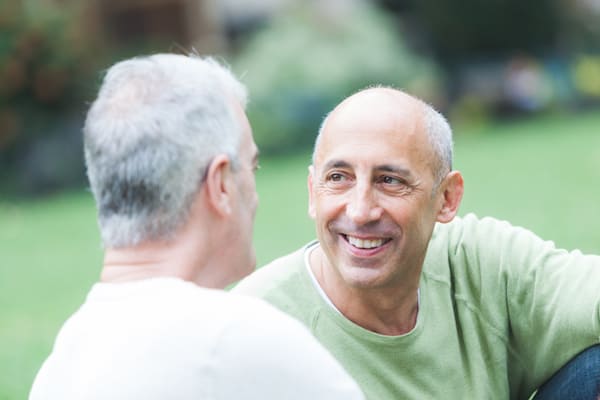 When it comes to LBGTQIA+ issues, older gay men often get overlooked. They aren’t seen by the rest of the gay male community, not through overt rejection but rather through invisibility.

This lack of visibility creates a sense of isolation and fear of rejection. Older gay men often worry about acceptance in the gay men community because of age differences between themselves and more visible gay men.

As a 40+ gay man, if you aren’t in a relationship, you’re likely living alone, and that can be very isolating and challenging. To break this aloneness pattern, it’s important to make even more of an effort to get out and meet people.

This task is challenging because you must make yourself vulnerable by initiating meetings and talking to new people. It can be scary and depressing if you’re not accepted, but it gets easier the more you do it, and you’ve got to keep doing it – don’t give up.

Here are some tips to help you overcome loneliness and improve your life:

2) Focus on friendship: Even if you’re single, put your focus on building friendships rather than dating. It’s a lot less stressful, and plenty of gay men have found their life partner through friendship.

3) Join a group: whether it’s a gay group, a Meetup, a sports group or a mix of different groups, find and build a community. Find a tribe of like-minded people for emotional support. And if it includes weekly meetings, that’s even better.

4) Connect through new connections: once you join a new group, get those connections to introduce you to new contacts. This is a way of exponentially increasing your friendship networks.

5) Meet in the real world: whether it’s a group activity or individual friends having coffee, meet up with each other regularly. It’s important to spend time around each other in person and frequently.

6) Step away from social media: spending a lot of time on social media and dating apps can drag you down emotionally. Intentionally limit the amount of time you spend on social media platforms and find new ways to get out into the real world to meet people face-to-face.

7) Work with a therapist: If you’re struggling with social anxiety or developing your confidence in meeting new people, working with an experienced LGBTQI+ therapist can make all the difference.

Click the link below to listen to my interview with Dr. Joe Kort on his podcast Smart Sex, Smart Love discussing loneliness in gay men.

Loneliness in gay men is a significant problem that doesn’t get a lot of visibility. Surrounding yourself with a network of friends goes a long way toward satisfying your need for emotional intimacy.