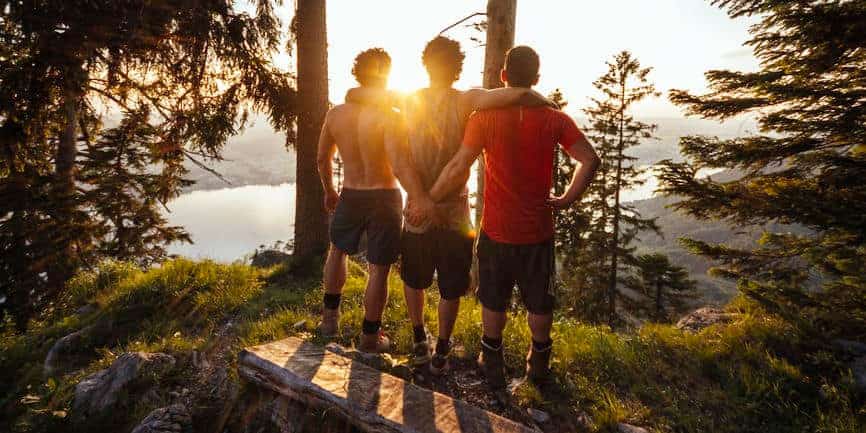 Polyamory: Is it Right for Your Gay Relationship?

You may have come across people who identify as “polyamorous.” Most people’s reaction to this revelation is one of horror since our culture trains us to believe one monogamous relationship at a time is the only acceptable form of intimacy and commitment.

Anything else is cheating, right?

Monogamy, which is what most people practice, is having only one intimate partner at once. Polyamory is the practice of having multiple intimate partners at the same time, with the full knowledge and consent of everyone involved.

There is no single way to do it, so defining polyamory can be challenging. Basically, instead of having a romantic and/or sexual relationship with one person at a time, a polyamorous person has multiple such relationships.

The practice is based on the concept that one individual cannot possibly fulfill all of someone’s emotional and sexual desires, and that people should be free to explore relationships as they see fit.

Polyamory has enjoyed growing cultural acceptance since the 1997 publication of The Ethical Slut, which outlines how to have multiple relationships with the consent of everyone involved.

Psychology Today, in 2014, estimated that at least 9.8 million Americans are actively practicing some type of non-monogamy.

But first of all, let’s discuss what polyamory is not.

What is a primary partner and how is it different than a secondary partner?

Some people engage in what is called “hierarchical” polyamory, in which partners are grouped into different “levels.” Someone might have a spouse, which is a “primary” level relationship—this relationship comes before all others and has the most importance and the highest level of intimacy. Then they might have a girlfriend/boyfriend/partner, who is a “secondary” partner. A “friend with benefits,” with whom the relationship is only sexual, might be considered a “tertiary” partner.

Other people have a “non-hierarchical” approach, in which different relationships, while they may take various forms, aren’t labeled by the level of involvement.

For example, someone in non-hierarchical polyamory might be legally married to one partner but have a similar level and type of commitment to another partner, while also having other relationships that are purely sexual. However, they aren’t “ranked,” and each partner is given as much importance as they want to have.

Is polyamory right for me?

Polyamory might be the right relationship format for you if:

If you’re not sure if your relationship is ready for polyamory, many people find working in couples therapy with a poly-informed therapist helpful for clarifying any potential issues before commencing.

How do I deal with jealousy?

Believe it or not, polyamorous people are not immune. Jealousy is very common in polyamorous relationships, especially when people are just starting out!

Jealousy, when it comes to relationships, is almost always the result of not getting what you need from a partner. It seldom has anything to do with the existence of the other partner.

For example, you might be feeling jealous because your primary partner isn’t devoting enough time to you. While you may feel that this is the result of them having another partner, often these jealous feelings can be easily dealt with when you practice good communication and collaboration.

You could, for example, schedule regular date nights and spend some quality time together. Negotiations like these are almost always the solution to jealousy issues.

Many people think that establishing “rules” around their partner’s behaviour will help with their jealousy, but often this just serves to hamstring the freedom that polyamory promises while not helping the original problem.

For example, you might require your primary partner to let you know two days in advance whenever they’re going to be seeing a secondary partner because you’re feeling jealous and insecure. While this can be tempting and often seem comfortable, it’s much more helpful to continually negotiate on everyone’s boundaries.

You might instead ask your partner to respect that you want to know via text, in advance, if they’re going to be home late from work for any reason. This will lead to a sense of security that doesn’t put the responsibility of “following rules” on the other partner.

Keep in mind, however, that “rules” are not the same as boundaries. And everyone should get tested for STIs before and after swapping bodily fluids with a new partner.

Polyamory is a relatively new cultural phenomenon, but that doesn’t mean it can’t have a place in your established relationship. It’s not for everyone, but if you can make it work, it can bring a whole new level of experience and joy into your relationship.